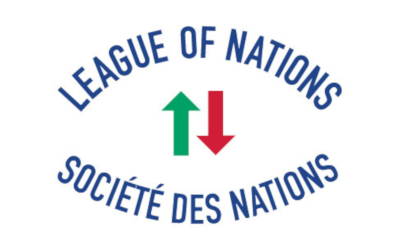 In terms of the potential generated by the population and its demographics, the most powerful countries in the world in 2019 were China (1753 points) and India (1738 points).  Since 1991, this represents a 10% fall for China and a 15% rise for India. Why?

China’s inherent population growth has disguised the fact that between 1991 and 2018 it was the country that aged the most.

One of the most fascinating leagues to watch over the next 10 years will be this one, because it is the only one where China is losing ground. Despite its massive population, demographic change might weaken China over this century.

Let’s recap how the last thirty years have gone in the League of Nations’ 7 powerapps: 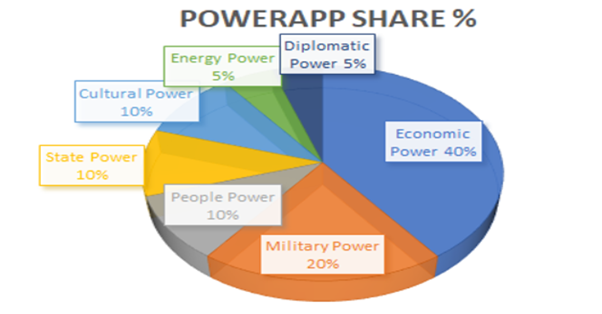 So far, we’ve tracked Smart Power economically and militarily. That’s 60% already of the smart power total. This week we look at peoplepower – assessing the top countries’ population and age dependency – which represents 10% of the League of Nations. 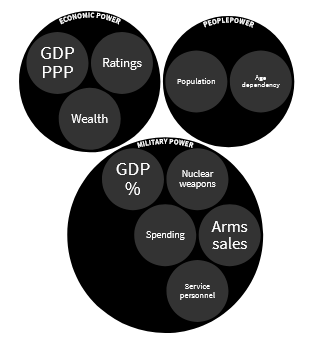 During our five epochs from 1500, a larger population meant more people to tax and fight wars. In 1850, the United States was home to some 23 million people, 13 million fewer than France. Today, the U.S. population is close to 330 million, larger than the British, Dutch, French, German, and Italian populations combined.

These favourable demographic fundamentals, more than geography or natural resources, explain why the United States emerged as the world’s preeminent economic and military power after World War II. 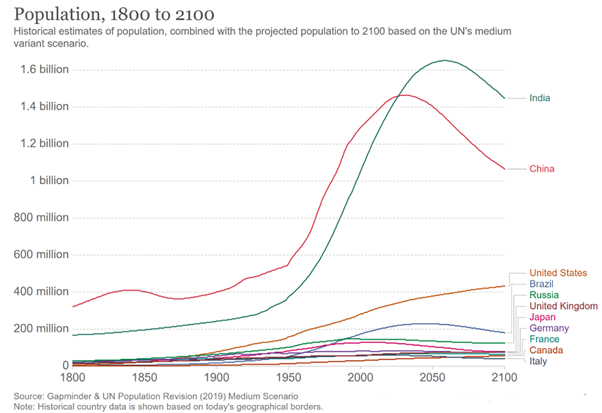 The United Nations projects that world population growth will slow significantly over the course of the 21st century, coming close to its peak at 10.9 billion by 2100. But how is this growth distributed across the world? How does the world look in 2100 compared to today?

Over the past 50 years Asia experienced rapid population growth. Today its population stands at around 4.6 billion. By 2050 it’s expected to rise to 5.3 billion, but then fall in the latter half of the century.

But demographics are more important now than population. Most global economic growth since World War II can be attributed to improvements in “human capital” - education, health, nutrition and training.

Each year of increased life expectancy saw a 4% permanent increase in per capita income.

Each additional year of schooling led to an average 10% increase in per capita GDP.

But the majority of countries now have a ‘dependent’ population that is 50-60% the size of its working-age population.

This “age dependency” ratio is the elephant in the peoplepower room. 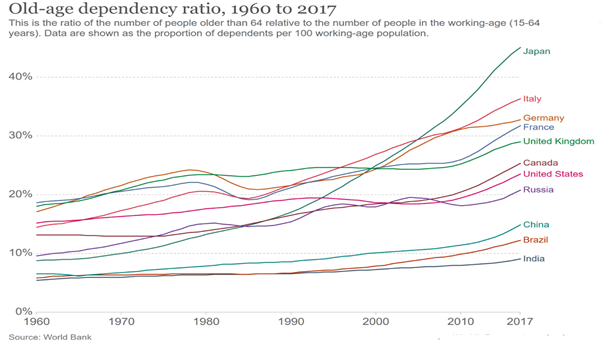 China Thanks in large part to demographics, rival states such as China have become genuine great-power competitors over the past few decades.

China has been the world’s most populous country for a long time: back in 1750, it had a population of 225 million, around 28% of the world population.

Between 1975 and 2010, China’s working-age population (those aged 15–64) nearly doubled, and total hours worked grew even faster, as the country abandoned the Maoist policies that had made paid labour both less available and less appealing. Overall health and educational attainment rose rapidly, as well.

But, over the past two generations China has seen a collapse in fertility, exacerbated by Beijing’s ruthless population-control programs. The one-child policy, introduced in 1979, was ended in 2015, but the damage had already been done. China’s total fertility rate (TFR) has been below the replacement level of 2.1 children per woman since at least the early 1990s.

Its working-age population has already been shrinking for the past five years, and it is set to decrease by at least 100 million between 2015 and 2040. The country will see a particularly large decline in its working-age population under 30, which may plunge by nearly 30 percent over these years. As China’s working population slumps, its over-65 population is set to explode. Between 2015 and 2040, the number of Chinese over the age of 65 is projected to rise from about 135 million to 325 million or more.

India will soon become the world’s most populous country as India’s population is predicted to surpass that of China next year and grow until mid-century, reaching an estimated 1.68 billion in the 2050s as the chart below shows.

By 2040, India’s working-age population may exceed China’s by 200 million. India’s population will still be growing in 2040, when China’s will be in rapid decline. By that time, about 24 percent of China’s population will be over 65, compared with around 12 percent of India’s. India has its own demographic and human resource problems—compared with China, it still has poor public health indicators, low average educational attainment, and high levels of illiteracy. Despite years of attempted reforms, India still ranks 130th out of 186 countries on the Heritage Foundation’s Index of Economic Freedom. Yet by 2040, India may have a larger pool of highly educated workers aged 20 to 49 than China, and its advantage will be increasing with every year.

But population growth will come to an end. The number of children in India peaked more than a decade ago and is now falling. India has seen rapid decline in fertility rates in recent decades – from an average of 6 children down to 2.4 children per woman – but it has had a large potential demographic dividend. The age dependency ratio in 1970 was almost 80%: a very young demographic. Since then it has fallen to 50%, and is expected to fall until the mid-2040s.

Studies, however, suggest that despite impressive rates of economic growth, India has failed to take full advantage of this possible demographic dividend. To reap the benefits of this demographic transition a few conditions are required: the labour market and jobs need to be available for young adults to move into; and the employability status of the youth needs to be suitable to fill these jobs. Studies suggest that the absorption of India’s youth into the workforce has not been as high as expected. Youth unemployment rates are high, and educational and health deficits are prevalent.

The United States has eroded or squandered its demographic edge in a number of ways, even as its traditional allies in Europe and Asia have struggled with population stagnation or decline. So far, the damage to U.S. power has been limited by the fact that the United States’ main geopolitical rivals face serious demographic problems of their own. Gazing further into the future, however, population growth and rising levels of education may propel new countries toward great-power status.

Russia sees itself as a global power, yet its grandiose self-conception is badly mismatched with the human resources at its disposal. From the standpoint of population and human capital, Russia looks like a power in the grip of all but irremediable decline.
In some respects, Russia is a typical European country: it has an aging, shrinking population and difficulties assimilating the low-skilled immigrant work force on which its economy increasingly depends. When it comes to human capital, however, Russia faces an acute crisis. After fully half a century of stagnation or regression, Russia has finally seen an improvement over the last decade in the overall health of its people, as evidenced by measures such as life expectancy at birth. But the situation is still dire. 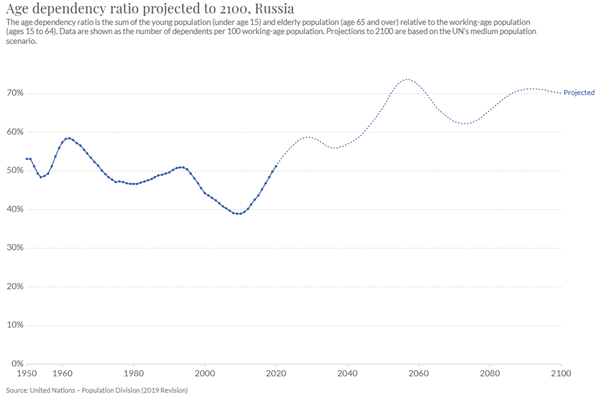 Russia is also failing in knowledge production with high levels of schooling but low levels of human capital. Russia earns less from service exports than Denmark, with its population of six million, and has less privately held wealth than Sweden, with a population of ten million. And since Russia’s working-age population is set to age and shrink between 2015 and 2040, its relative economic potential will diminish, too.

Europe and Japan Projections for the EU and UK show that regardless of possible developments in fertility or migration, there is clear, unstoppable momentum towards population aging.

The EU member states and Japan, for instance, all have healthy, well-educated, and highly productive populations. Yet the EU and Japan have both registered sub-replacement fertility rates since the 1970s, and their fertility rates began to drop far below the replacement level in the 1980s.

In both the EU, Germany and Japan, deaths now outnumber births. Their working-age populations are in long-term decline, and their overall populations are aging at rates that would have sounded like science fiction not so long ago. The main demographic difference between the EU and Japan is that Europe has embraced immigration and Japan has not. Japanese demographers project that a woman born in Japan in 1990 has close to a 40 percent chance of having no children of her own and a 50 percent chance of never having grandchildren.

The big global demographic transition that the world entered more than two centuries ago is coming to an end: This new equilibrium is different from the one in the past when it was the very high mortality that kept population growth in check. In the new balance it will be low fertility keeps population changes small.

Population decline does not preclude improvements in living standards, but it is a drag on relative economic and military power. This is the smart power population conundrum. It will require the United States to cultivate alliances elsewhere.

According to the U.S. Census Bureau, the United States’ working-age population is set to grow by about ten percent between 2015 and 2040. Over the same period, Germany’s and South Korea’s working-age populations are expected to shrink by 20 percent, and Japan’s, by 22 percent. The number of young men aged 15 to 24, the group from which military manpower is typically drawn, is projected to increase over that period by three percent in the United States but to fall by 23 percent in Germany, 25 percent in Japan, and almost 40 percent in South Korea.

As population trends sap the strength of traditional powers in Europe and East Asia, they are propelling a whole new set of countries toward great-power status. As Europe, Japan and South Korea lose population, democracies such as India, Indonesia and the Philippines will continue to grow. The United States and India have already begun defence cooperation in the interest of countering China. By 2040, Indonesia could have a population of over 300 million, up from around 260 million today, and the Philippines’ population could reach 140 million—which would be possibly larger than Russia’s. Both countries, moreover, are young and increasingly well educated.

In 2015, China had almost four times as many people aged 20 to 39 as Indonesia and the Philippines did combined; by 2040, it is projected to have only twice as many. India, Indonesia and the Philippines are likely to come into increasing confrontation with an expansionist China, and as they do, they may discover an interest in deeper security cooperation with the West.

So the smart power consequences of India’s population eclipse of China is to embed the American Pacific pivot and to witness the deepening of new alliances to encircle a potentially declining China.